Home/Blog, Parents, Students, Teachers/Why Learners Forget Information and How to Remember What We Learned?
Previous Next

Why Learners Forget Information and How to Remember What We Learned?

Our Brain is an organ that is taken for granted to retain as much information as possible. However, our brain also forgets. To explain how fast or slow the brain tends to forget information researchers refer to what is called – the forgetting curve.

What is the forgetting curve?

The forgetting curve is a graph of data that describes how brain retention power decreases with time. Hermann Ebbinghaus was the first person who studied about the human forgetting behavior in his experiments. He had performed a number of memory experiments on himself over a period of time. The data from the experiments were recorded and analyzed thereafter to give rise to the shape of the forgetting curve. He concluded that forgetting happens in an exponential way. 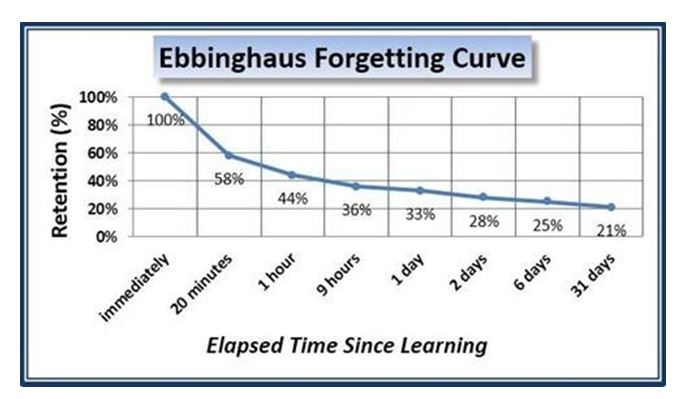 Given above is a typical forgetting curve. At the very beginning, the brain retention is 100%, that is, at the time point when you actually learned some new information. As shown in the graph, with time the retention drops in a sharp manner sharply down to around 40% within a short span of time.

According to the forgetting curve maximum memory loss happens during the first few days. Later the rate of forgetting gets slower as shown by a lesser steepness on the right side of the graph.

Coming to the forgetting speed, it depends on a bunch of different factors:

Everybody does not learn in the same manner

Every person differs in their capacity to absorb, learn as well as retain information. However, the shape of the forgetting curve for every individual for base tests (like memorizing nonsensical words) is almost identical. So, the differences that are seen from person to person in retaining information arise due to the difference in their acquired learning behaviors.

Also, there are different kinds of learners. Some people transform the new piece of information into a memory representation that seems more suitable for their individual personality. For example: People who retain more from audio mode are called as audio oriented learners and the ones who are more comfortable with video lessons are called as visually oriented learners. There are also kinds of people who naturally have a better capacity to use the brain memory hooks and other kinds of mnemonic techniques. Hence they tend to remember effortlessly and can relate the new information to the ones that they already are aware of.

Read: How to Memorize What You Learn Better

Tips to increase your memory:

Learn: The Science Behind the Making of Robomate+